“If God is for us, who can be against us?” Why was King Charles executed 369 years ago? 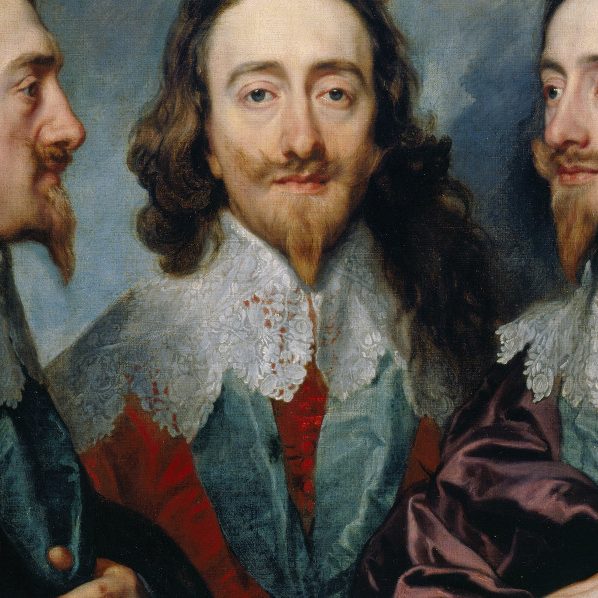 Today marks 369 years since the execution of Charles Stuart, king of England, Scotland and Ireland, on a scaffold built next to the Banqueting Hall at Whitehall in London. He was, to all intents and purposes, to be executed in the street.

He was surrounded by large numbers of soldiers, who faced the crowd rather than the scaffold in case of last minute attempts at a rescue. The crowd were kept so far away from him and his last speech was uttered in such a quiet voice that it’s unlikely any onlookers heard him, his final words lost to the wind. But he was flanked by Colonel Tomlinson and Bishop Juxon who reported his words after the execution:

“All the world knows that I never did begin a war with the two Houses of Parliament. ….for I do believe that ill instruments between them and me has been the chief cause of all this bloodshed. I have forgiven all the world, and even those in particular that have been the chief causers of my death……For the people; And truly I desire their liberty and freedom as much as anybody whomsoever, but I must tell you, that their liberty and freedom consists in having of government; those laws by which their life and their goods may be most their own. It is not for having share in government that is pertaining to them; A subject and a sovereign are clean different things, and therefore until you do put the people in that liberty as I say, certainly they will never enjoy themselves. Sir, it was for this that I am come here. If I would have given way to an arbitrary way, for to have all laws changed according to the power of the Sword, I needed not to have come here, and therefore I tell you….that I am the martyr of the people. I have a good cause and a gracious God on my side.”

Charles was brought forward to the anonymous executioner’s block – which was too low, the normal block having been lost – wearing two shirts, since he feared the cold might make him shiver and people would think him afraid. His hair wrapped up in the small cap he was wearing, he said a prayer, placed his head on the block, and signalled the executioner when he was ready by thrusting out his arms.

He was beheaded with one clean stroke.

It was common practice for the head of a traitor to be held up and shown to the crowd with the words “Behold the head of a traitor!”. Although Charles’ head was held up, it is unclear whether the words were used, various sources disagree. But in a highly unusual move after a traitor’s death, the King’s head was sewn back onto his body for burial. Charles was buried in private on 7 February 1649, inside the Henry VIII vault in St George’s Chapel, Windsor Castle. His funeral took place in silence, as his chaplain was denied the right to use words from the Book of Common Prayer, Charles’ imposition of which on the Scots had been one of the sparks that ignited the civil war.

So how did the English come to try and then execute their own monarch?

Despite the beliefs of some, Parliament did not go to war intending to execute or even remove King Charles. In 1642, those who took up arms against Charles did not claim that it was for Parliament against the king – their cry was “for King and Parliament”. Medieval attitudes about the supremacy of a divinely-appointed monarch still maintained a strong grip on the public consciousness so those who had risen against Charles Stuart were careful to blame the discord not on him but on ‘evil advisers’ who, they claimed, deliberately misinformed him – either for personal gain or for a foreign, Roman Catholic, agenda. The king, they contended, had been led astray.

The frustrations that had led both sides to this point are numerous and complex – Tim Harris’ Rebellion: Britain’s First Stuart Kings, 1567-1642 sets out an argument for both economic and social problems made worse by a flawed transition from the Tudors to the Stuarts, with Charles’ actions exacerbating existing tensions, and a religious settlement that only increased instability. None of these can be laid at any one person’s feet, least of all Charles’, but it was his way of ruling – blind, obstinate, uncompromising, loyal to a fault but easily swayed – that pushed the country over the edge and this personality flaw would certainly contribute most particularly to his own fate. However, in The Noble Revolt, John Adamson sets out in microscopic detail the events leading up to the breakdown in the relationship between crown and Parliament, arguing that a ‘junta’ developed amongst Puritan peers and MPs – when their attempts to clip the King’s wings met his stubborn obstinacy, events boiled over into all-out war.

But, as Niccolò Machiavell pointed out, wars begin when you will, but they do not end when you please. Whatever the intent of both sides at the beginning of the first civil war, as the conflict dragged on and the tide ebbed and flowed back and forth across the country, voices within Parliament began to become frustrated with the lack of a decisive victory that would bring the king to a settlement of their liking.

The night before the Battle of Marston Moor, outside the city of York, in July 1664 the commanders of the three Parliamentarian armies that faced Prince Rupert’s Royalists – the Earl of Manchester, Lord Fairfax, and the commander of the Scottish forces, Lord Leven – met with an envoy from their political masters in London, Sir Henry Vane. It was during these discussions that Vane first proposed the idea of a government without the king. The idea was roundly rejected by the generals, who believed Charles could still be accommodated – especially the Earl of Manchester who had been a boyhood friend of Charles’. But there was one man present at that meeting who would give a sympathetic ear – Manchester’s colonel of horse, Oliver Cromwell. With the seed of an idea planted, it quickly took root, especially within the increasingly radicalised ranks of the Eastern Association Army, of which Cromwell was a major part. When the New Model Army was created in 1645, it was not only England’s first professional army but had been raised and trained to act as the decisive instrument in Charles’ defeat.

For radicals within Parliament it became increasingly clear that the king would not compromise and was merely playing for time so that he could attempt to drive the factions of Parliament apart. When Charles provoked a second Civil War in 1648 by arranging a Scottish invasion of England while negotiating with Parliament in what appeared to be good faith, it sealed his fate in his opponent’s eyes – he could not be trusted and there would be no peace so long as Charles Stuart, “the man of blood”, lived.

Men such as Cromwell, men of the ‘middling sort’ who had risen on merit rather than position, had rapidly risen to prominence since the end of the first Civil War and he, amongst many others, suspected that their Parliamentary comrades would be only too willing to negotiate and reach a settlement with the king. Parliament was quickly losing control of the army it had created and when it tried to disband the New Model without settlement of its arrears or grievances, the sense of betrayal drove a wedge between the army and Parliament. This was fuelled by religious divides between moderate Presbyterian and a minority of radical Independents, the latter of whom controlled the army. These Independent, who rejected any attempt to negotiate with Charles, effectively seized Parliament in Pride’s Purge in December 1648, when Presbyterian MPs were arrested or forcibly excluded from the Commons. This created the Rump Parliament, which would not only sanction the trial of the king but sit in judgement upon him.

The case against Charles was a complex and, quite literally, a revolutionary one – not only did it insist that the monarch must abide by the law like everyone else (opponents argued that since all authority flowed from the crown, therefore the monarch was above that authority) but Parliament argued that since the king is charged with the welfare of his own people when he wages war against them he is guilty of treason. In 2005, human rights barrister Geoffrey Robertson’s The Tyrannicide Brief: The story of the man who sent Charles I to the scaffold argued that the trial set a precedent that has helped lead to the prosecution of today’s war criminals in The Hague and elsewhere.

Whatever the merits of the case in 1649, the judgement was effectively a foregone conclusion – death. With a swing of the executioner’s axe, more than 10 years of war and almost 50 years of Stuart rule of England, came to an end. England was a republic, for the first and last time.

But it did not mark an end of the country’s woes, for greater conflict – and the bloody and costly invasions of Scotland and Ireland – beckoned.

We re-enact this period to keep these memories alive, to ensure that people don’t forget the bloody and divisive period which helped form our nation, and the people whose lives and deaths bought us our freedoms and privileges.

We are a Parliamentarian regiment, but it’s not about claiming one side was right and the other was wrong, and the anniversary of Charles’ death is a good time to remember this.

THIS WEEKEND: The Storming of Bolton!
3rd July 2018

ECW Q&A: Did any of the regicides escape the vengeance of Charles II?
8th February 2018
Did you see us in Nantwich and want to be a part of this incredible hobby? Join up now!
27th January 2018
The countdown to the Battle of Nantwich begins: mud, fighting, beer, and song!
15th January 2018
What’s the future for the 17th Century on screen?
5th October 2017

This weekend: the Roundheads march into Wiltshire!
26th May 2017