On this day in 1644: the infamous Bolton Massacre 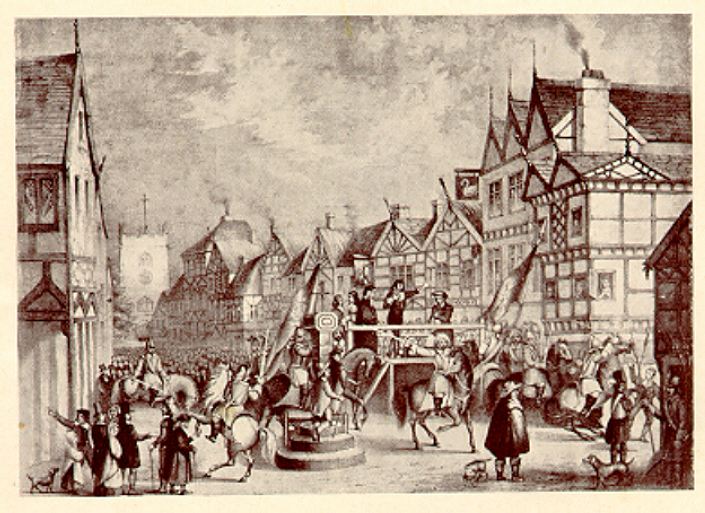 A while back we discussed the effect the Sacking of Magdeburg had on the English Civil War eleven years later, in which we said “the true horrors of the Thirty Years War were thankfully absent during England’s strifes in the 1640s”. While that is certainly true in terms of scale, we wouldn’t want it to create the impression that the English Civil War was somehow without its own horrors. Today is a very salient reminder that the civil wars in this country could be every bit as brutal as anything Europe could deliver. For today marks the 368th anniversary of The Bolton Massacre. As the campaigning season of 1644 got underway, the Royalists had been forced onto the defensive. The King’s capital, Oxford, was threatened and his northern stronghold of York was besieged. Parliament had recently allied itself with Scotland, which was sending a vast, fresh army south. The King’s dashing young nephew, Prince Rupert of the Rhine, arrived in Shrewbury to begin preparations to relieve York and secure the north before rejoining the King’s main force in the south. Rupert struck out on the infamous “York March” on 16 May 1644, the aim being to head through Lancashire, gathering reinforcements and securing the county for Royalist troops returning from the fighting in Ireland, before marching to York. Rupert was joined by local magnate, James Stanley the 7th Earl of Derby.

After storming the Parliamentarian outpost at Stockport on 25 May, Rupert by-passed the well-fortified town of Manchester and advanced on Bolton on 28 May. The Parliamentarian commander in the area Colonel Alexander Rigby had been besieging Lathom House, the Earl of Derby’s family seat, but on hearing of the loss of Stockport his forces abandoned the siege and retired to Bolton – a fiercely Puritan town known as the “Geneva of the North”. Not knowing the town was so well defended, Rupert ordered four regiments to attack in heavy rain. They were beaten back with 300 casualties, including the wounding of Colonel Russell, who was the commander of Rupert’s own regiment of foot. Rupert ordered a second attack, which was led by the Earl of Derby.

As the British Civil Wars site has it: “The Royalists were enraged because Colonel Shuttleworth’s men had hanged one of the soldiers taken prisoner during the first attack, apparently believing that he was an Irish Catholic. Although two of Rupert’s infantry regiments had been released from service in Ireland by the signing of the Cessation of Arms, all the soldiers were English. However, Sir Thomas Tyldesley’s regiment had been recruited mainly from Lancashire Catholics and regarded the hanging as an affront to their religion. Fuelled by sectarian anger against the Puritans of Bolton, the Royalists successfully stormed the walls and carried the fight into the streets of the town.” The storming was prolonged, brutal, and bloody.

It was alleged that up to 1,600 of Bolton’s defenders and inhabitants were slaughtered during and after the fighting. It can be argued that the laws of war were different in the 17th Century, and anyone not immediately surrendering could expect to be dealt with harshly. Rupert’s attack had also been sudden, so there was no traditional ‘parlay’ in which each side offered terms. But the viciousness of the massacre, and the fact so many inhabitants died, was shocking.  The Royalist soldiers were allowed to plunder the town, unchecked and unrestrained by either Rupert or the Earl of Derby, resulting in murder, rapine, theft, and destruction. This merely added to Parliamentarian hatred of Rupert, who had already led the infamous attack on Birmingham in 1643, and the massacre was a Godsend for Parliamentarian pamphleteers who reported the casualties to a horrified populace.

After Bolton, Rupert attacked and captured Liverpool (though only after most of the garrison escaped across the Mersey in the dead of night) before heading across the Pennines to relieve York. On a moor between York and Leeds, they and the Earl of Newcastle took on the combined might of Parliament’s Northern and Eastern armies, and the Scottish force under Lord Leven. The Battle of Marston Moor was a stunning Parliamentarian victory. The King lost control of the North, as well as the veteran infantry of Newscastle’s army, and his nephew escaped south with just a handful of cavalry. Bolton was recaptured in September.

But the story of the Bolton Massacre doesn’t finish there. At the final Royalist defeat at the end of the Third English Civil War in 1651, the Earl of Derby was captured near Nantwich in Cheshire and court-martialled. The mercy shown to him upon his capture was revoked, and he was condemned to death. On 15th October, the Earl was beheaded in Bolton – the very town whose infamous sacking surely sealed his fate.